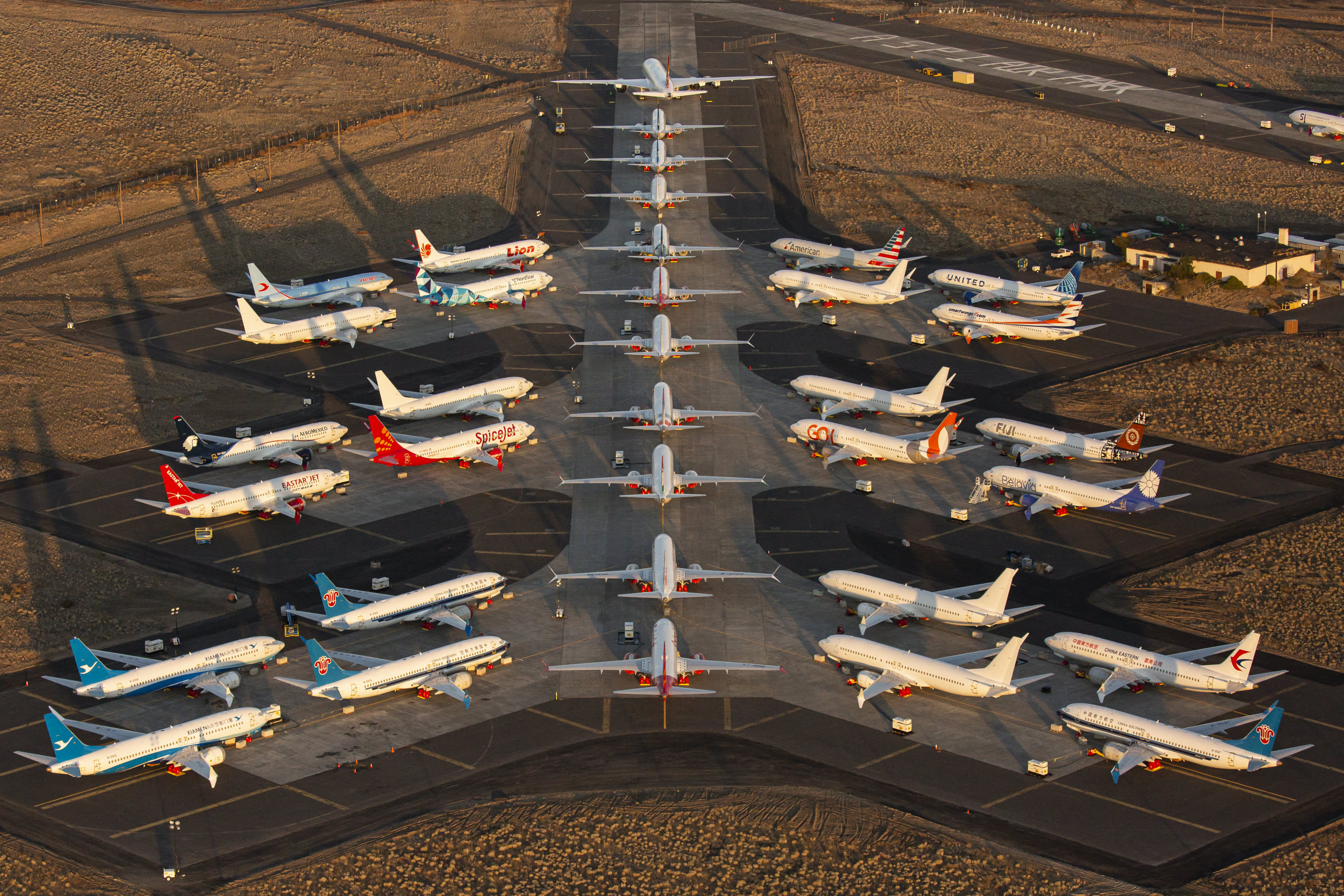 Boeing 737 MAX airplanes, along with one Boeing 787 at top, are parked at Grant County International Airport October 23, 2019 in Moses Lake, Washington.

Boeing reported a $2.4 billion loss for the second quarter Wednesday and said it plans to slow production of its main commercial aircraft as the coronavirus pandemic hurts demand for new planes and its best-selling 737 Max jets remain grounded.

Results came in worse than analysts expected. Revenue fell 25% from the year-ago quarter to $11.8 billion below analysts’ forecasts for sales of $13.16 billion. On an adjusted basis, Boeing lost $4.79 a share, compared with a $2.54 adjusted per-share loss Wall Street estimated.

The pandemic has driven up financial losses at Boeing’s airline customers and hurt demand for new planes, though Boeing was in crisis before coronavirus spread around the world. Boeing’s shares are trading at roughly half their value from a year ago, and its best-selling plane, the 737 Max, has been grounded since March 2019 following two fatal crashes. Regulators aren’t expected to clear the planes to fly again before the fall.

Here’s what Wall Street expected, based on average analysts estimates compiled by Refinitiv.

The lengthy grounding of the 737 Max along with financial pain at carriers has driven up cancellations of new Boeing jetliners this year, meaning less cash for manufacturers and suppliers.

Boeing is set to detail the impact of weaker demand for its aircraft and deferrals of new orders, a soured outlook that has rippled down to big suppliers like engine-maker General Electric and Spirit Aerosystems. Spirit, which makes the fuselages for the Max, asked lenders to loosen the terms on some of its debt, sharing a forecast for far fewer deliveries of the 737s than originally expected, according to a forecast seen by CNBC.

Boeing confirmed plans to lower production plans on Wednesday. It said it would gradually increase manufacturing of its 737 Max to 31 a month by the beginning of 2022, compared with plans to do so next year.

Boeing has more than 470 planes sitting on the ground that haven’t been delivered to customers, most of them 737 Max jets, according to consulting firm Ascend by Cirium.

Boeing’s CEO Dave Calhoun in April said air travel demand will likely take two or three years to recover. International demand has been particularly soft, hurting the outlook for Boeing’s widebody commercial planes, like the 787 Dreamliner. The International Air Transport Association, a trade group that represents most of the world’s airlines, on Tuesday said it expects passenger air travel demand globally to recover to 2019 levels in 2024, a year later than it previously forecast.

The company has been slashing costs and said this spring it aims to cut 10% of its workforce of about 160,000 people. It has also shored up liquidity with a monster $25 billion debt sale in April, Boeing’s largest ever, to help weather the crisis.

Boeing executives will detail results on a 10:30 a.m. ET call on Wednesday.

This story is developing. Please check back for updates.

Special needs families face increased financial pressure in Covid-19 crisis. This can help
The real story about getting rich by investing in gold, cryptocurrency and IPOs
WHO warns that waiting to achieve herd immunity to the coronavirus will kill a lot of people
Exxon shares fall after it loses money for a second straight quarter
Monzo’s losses double as popular UK digital bank warns of pandemic uncertainty