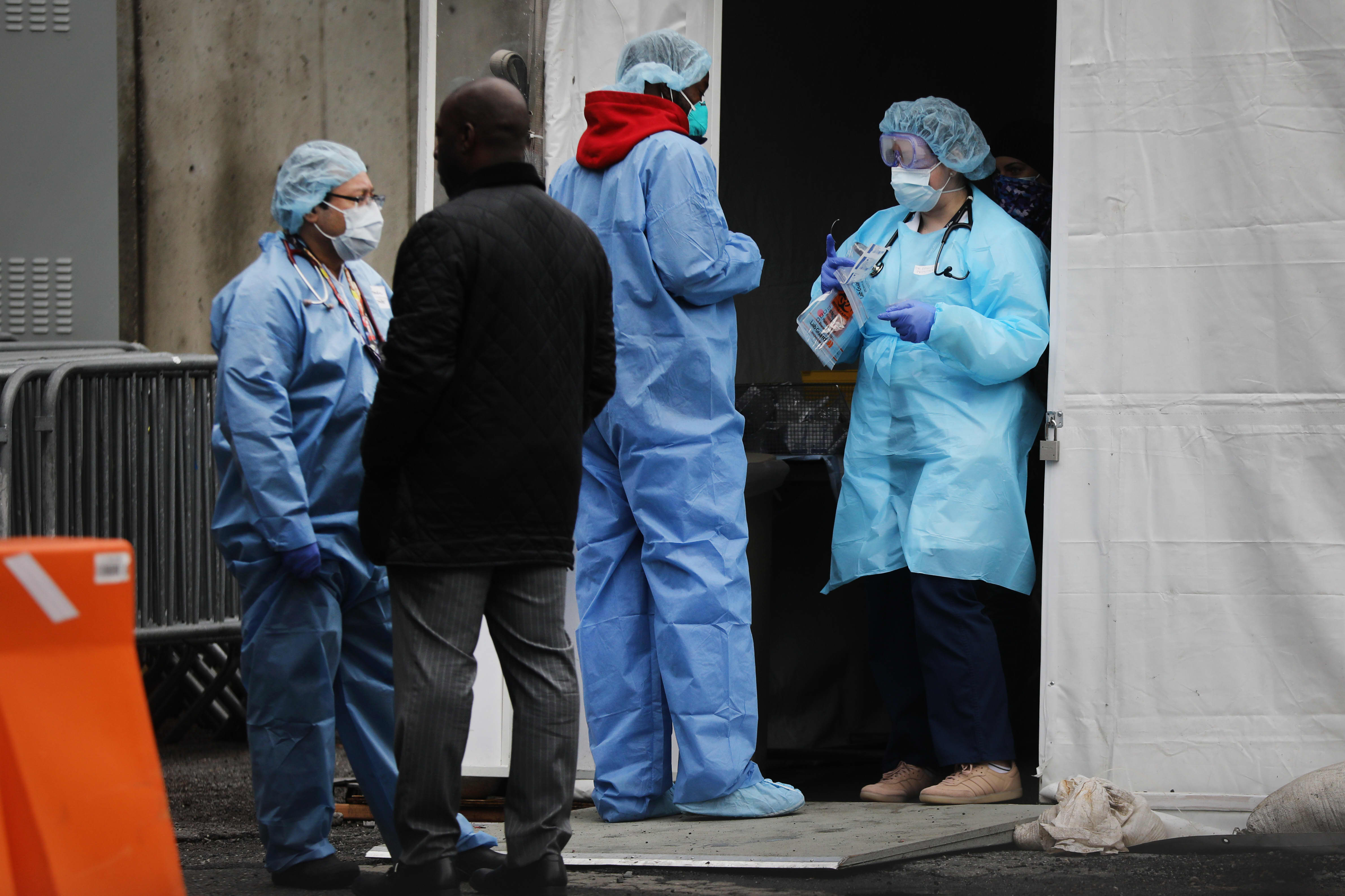 Medical workers and other officials gather outside of the Brooklyn Hospital Center where testing for the coronavirus has started on March 19, 2020 in the Brooklyn borough of New York City.

This is CNBC’s 24-hour blog covering all the latest news on the coronavirus outbreak. All times below are in Eastern time. This live blog will be updated throughout the day as the news breaks.

The data above is from Johns Hopkins University

The number of confirmed coronavirus cases in Germany has risen by 2,705 within a day to reach 16,662, the Robert Koch Institute for infectious diseases said on Saturday.

It said a total of 47 people had died after testing positive, an increase of 16 from a tally of 31 published on Friday. —Reuters

8:30 am: WHO offers tips for living under quarantine

Don’t smoke, limit drinking, exercise and try not to watch too much news.

These are some of the recommendations from the World Health Organization to stay physically and mentally healthy while living under quarantine. The new coronavirus that originated in Wuhan, China less than three months ago has spread to more than 300,000 people in nearly every country across the world.

More than 100 million people across the world are living under some form of social confinement as public officials struggle to contain the COVID-19 outbreak that’s already claimed more than 12,000 lives. —Dawn Kopecki

8:15 am: Hospitals seek emergency credit and $100 billion in US aid

U.S. hospitals are setting up coronavirus wards and tents, seeking emergency credit lines and lobbying Washington for a $100 billion stabilization fund to help meet an expected onslaught of patients as the pandemic sweeps the nation.

“We believe hospitals and health systems should be top priority number one for the Congress, at this moment,” said Robyn Bash, vice president for government relations at the American Hospital Association.

The AHA estimates that some hospital systems are losing up to $1 million a day, and the costs are mounting. In many states hospitals have been forced to cancel all elective surgeries, along with non-emergency procedures which generate higher revenues for their facilities. At the same time, they are ramping up staffing to handle the expected influx of acute care patients and spending on as much acute care equipment as they can find.  —Bertha Coombs

The Spanish health ministry said Saturday that 1,326 people had now died from the coronavirus in the country, a rise of 324 on the day before.  The total number of confirmed cases now stands at 24,926.

It comes after Isabel Diaz Ayuso, the president of the region of Madrid, said Friday that the majority of people in Spain’s capital city will get the coronavirus. Speaking to state radio Thursday, she said eight out of 10 people in the city would contract COVID-19.

Spain is second only to Italy for coronavirus-related cases and deaths in Europe, which has become the epicenter of the outbreak. The WHO has advised all countries to adopt a mix of interventions based on an analysis of the local situation and context, with containment as a major pillar. —Katrina Bishop and Sam Meredith

6:21 am: Iran’s death toll tops 1,500 as confirmed cases in the country continue to rise

The number of people who have died from the coronavirus in Iran has reached 1,556 — a rise of more than 100, a health ministry spokesman said on Saturday, Reuters reported.

Speaking on state TV, Kianoush Jahanpour said the total number of confirmed cases was now at 20,610.

Iran has the fifth-highest number of cases of the virus in the world, according to data compiled by Johns Hopkins University. It comes behind China, Italy, Spain and Germany.

Iran’s President Hassan Rouhani said Saturday that the country had to “do everything necessary to return economic production to normal,” Reuters reported. Rouhani said that social distancing measures would likely be lifted in two-to-three weeks. — Katrina Bishop

2:40 am: Starbucks to shut most cafes in US and Canada

Starbucks said it will close most company-operated cafes across North America for two weeks, and service will be limited to drive-throughs, in helping to slow the spread of the virus, according to a Reuters report.

Cafes in or near hospitals and health care centers will be exempted from closing, it said. — Weizhen Tan